With Vanguard now in the wild for players to enjoy, users are exploring the many weapons available and may have stumbled upon the Combat Shotgun.

Once again, Shotguns have become a viable option for players within multiplayer, as this American made weapon is deadly up-close.

With a large portion of Vanguard's maps involving close quarters combat, you're going to want to try this weapon out.

Here's the best loadout for the Combat Shotgun in Call of Duty: Vanguard.

With a staggering, 10 attachments to pick on your weapon, you're truly spoilt for choice.
When choosing your attachments, you'll want to consider what attachments will improve this weapons weak areas and how you tend to play.
The Combat Shotgun is incredibly powerful, dealing multiple pellets with each slug, making it a nightmare to run up against someone using this weapon in close quarter situations.
However, like any shotgun, it's not the best up close, so keep this in mind when taking on gun fights. 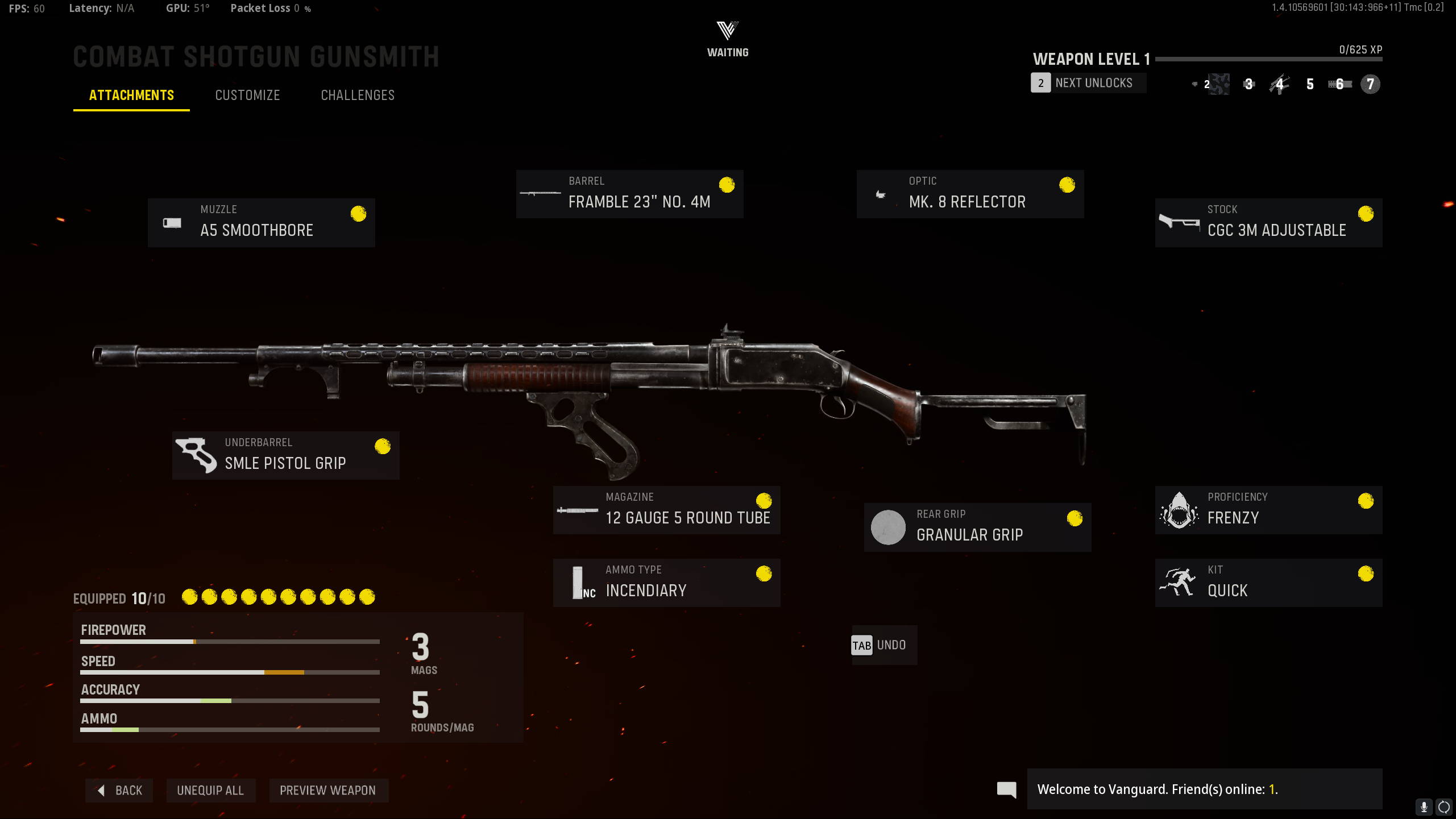 This setup is tailored to best suited for run and gun playstyles, ones where you'll constantly be up in your opponents face, making them uncomfortable.
As well, this build has a major emphasis on hipfire and quick movement, so you can get out of dodge fast!
There are a few Muzzle attachments that are beneficial, but the wide pellet spread that the A5 Smoothbore is perhaps the best.
Your Barrel choices are rather complex, as there's some decent choices such as the Sawed Off and Framble No. 3. However, the one we've chosen generally increases the recoil control and damage range, making it more effective from longer distances.
Your Optic comes down to preference in my opinion and with the Combat Shotgun, it won't matter too much.
Our Stock choice is one that bolsters some bonuses to hip fire accuracy, and a flurry of other metrics such as ADS and movement speed.
The Underbarrel options comes down to the SMLE Pistol Grip and the Mark VI Skeletal. The former is the one we've picked for this loadout, as it gives a boost to hip fire and sprint to fire speed, which are both important for this class.
The Magazine attachment is an easy choice as most of them make you slower in the case of the 10 round drum, or just simply don't have enough ammo in the case of the 3 round tube.
We've gone with the Incendiary rounds for this Combat Shotgun loadout, as if you remember back during MW 2019, this was a deadly combo with certain shotguns. Once again, these fire inducing rounds have proved to be a real pest if hit with them over time.
More ADS speed and stability comes into play with the Granular Grip, but, there's other options here such as the Stippled Grip or the Leather Grip.
Your Proficiency is a preference call - Sleight of Hand, Frenzy and Vital are the ones you can experiment with regarding this class. We've opted for Frenzy, simply due to the fact that it gives you a little health boost after a kill.
Your Kit options are only really down to Quick and Fully Loadout. Since you want to be as fast as possible, we recommend taking Quick.

The Throwing Knife and Molotov do similar jobs in that it gives you some extra range when an enemy is just out of reach. The Throwing Knife can quickly make up the distance your shotgun can not, but requires accuracy. The Molotov needs less accuracy and will provide some defensive qualities by laying a pool of fire on the floor. The Smoke grenade is a good choice for getting over open spaces without being seen or shot.

Ghost will keep you off the enemy radar and Tracker will give you a helping hand in hunting down your enemies. Overkill is a solid option as the perk 3 choices aren't amazing, so you can have a reliable secondary. However, if you're opting to go shotgun only, either Double Time or Lightweight are fine.

The shotgun requires a lot of running and without Ghost, you're going to make a lot of noise. So, making use of Dead Silence when flanking is a good Field Upgrade choice. 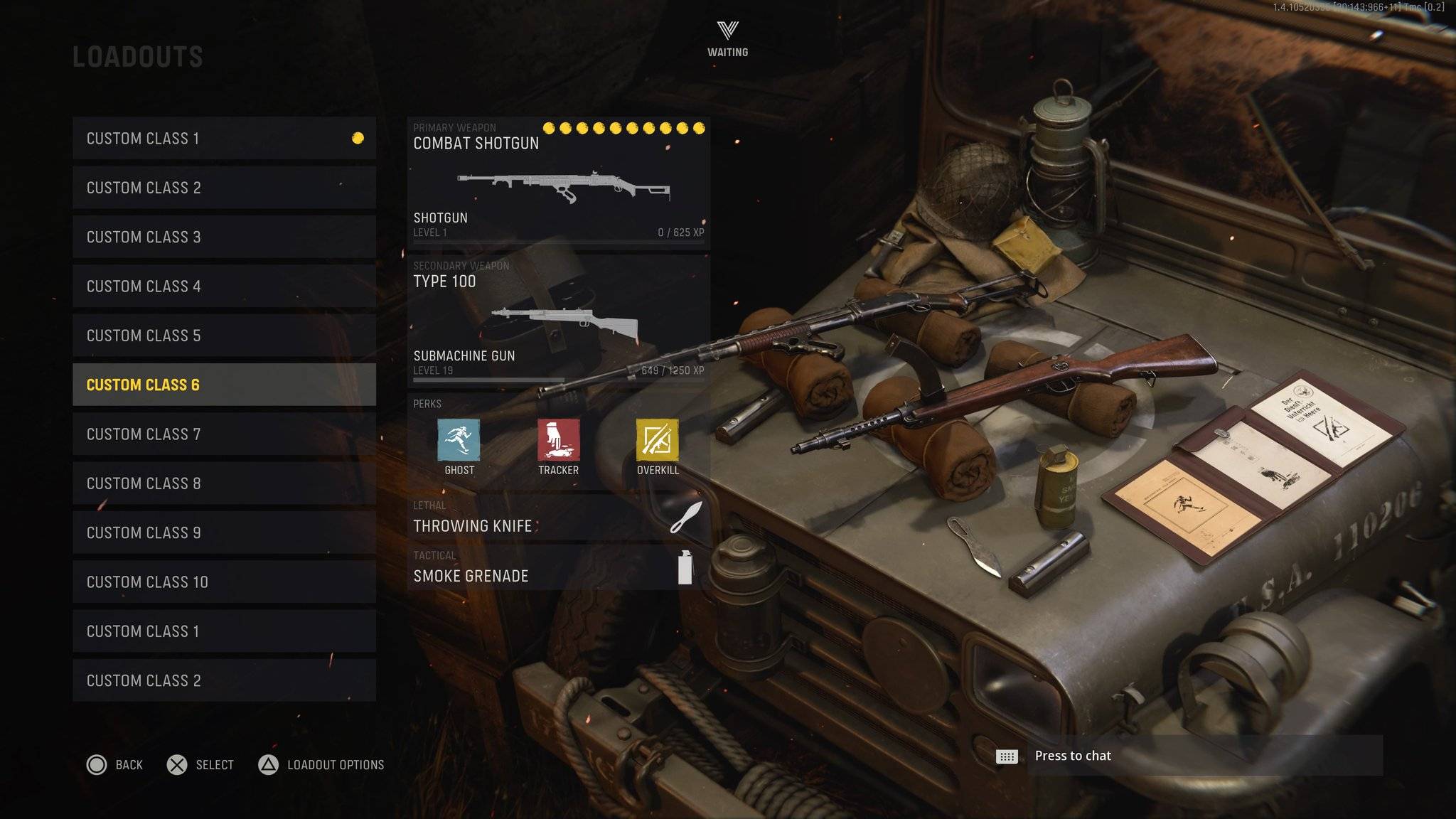