Ready for some Victory Royales?

Fortnite has been flipped upside down, literally. Apollo Island has completely rotated, with Chapter 3 now taking place on the new side, dubbed Artemis. But Chapter 3 has brought a lot more than just a new map. Fresh features and gameplay tweaks have been implemented that change up many facets of the game. Here's a few tips and tricks to help you find your feet and get started in Fortnite Chapter 3 Season 1.

By far the most exciting addition to Fornite in Chapter 3 Season 1 is Spider-Man's Web Shooters. By donning these gloves, you'll be able to swing around Artemis just like the masked hero himself.

They're not technically in the game as a standard item yet — they'll be added to the battle royale mode properly on December 11. However, you can try them out early by heading to the Mexican restaurant in Greasy Grove and giving the Guaco taco NPC 400 gold. Harvesting resources around the map will net you gold, but you'll need to do some serious farming.

Epic has made using the web slingers very user friendly — you don't have to worry about physics or timing. Simply hold down the swing button while close to structures that are taller than you and you'll be pulled forward. When you start a swinging arc, your speed quickly accelerates. As long as you’re moving mostly horizontally, you'll keep this speed. As an added bonus, they can even stick weapons and reel them back to you.

While Spider-Man's Web Shooters have unlimited ammo, they do have a cooldown between uses. The main thing to look out for when using Spider-Man's Web Shooters is running into a wall or object. Doing so will cancel your web slinging and drop you on the ground. This triggers a cooldown, and you'll need to wait before you can use them again. If you are trying to dismount on a certain platform, roof, or area, end your arc at the object's height while looking at it. Doing so tends to "pull" the player towards the surface for a smooth landing.

Downed Players Can Do Much More

Once you've found one of these devices, you're going to want to head over to The Joneses, as this is where you'll obtain the next part of your questline! One major change is to what Downed But Not Out players can do. They are now able to pick up items, open doors and chests, and access their inventories as well. On top of all that, they crawl faster too. It will take some getting used to, but plan on how to retreat when you're in an engagement. If you get downed now, there is a much higher chance of your teammates being able to pick you back up.

How To Slide Quickly

Taking a page out of Apex Legends' book, Epic has added sliding to Fortnite Chapter 3. Holding down the crouch button after running causes your character to slide on their knees. You can build, shoot, and edit while sliding also.

As soon as possible, you should go to your controller settings and turn down "Slide Hold Time" to the lowest setting. This allows you to slide nearly instantly after you press crouch. The downside to this is that if you're trying to just crouch, you may end up sliding. Given some practice, however, this won't be a long-term issue. Sliding is crucial to master as it decreases your hitbox and allows you to move quickly down slopes. 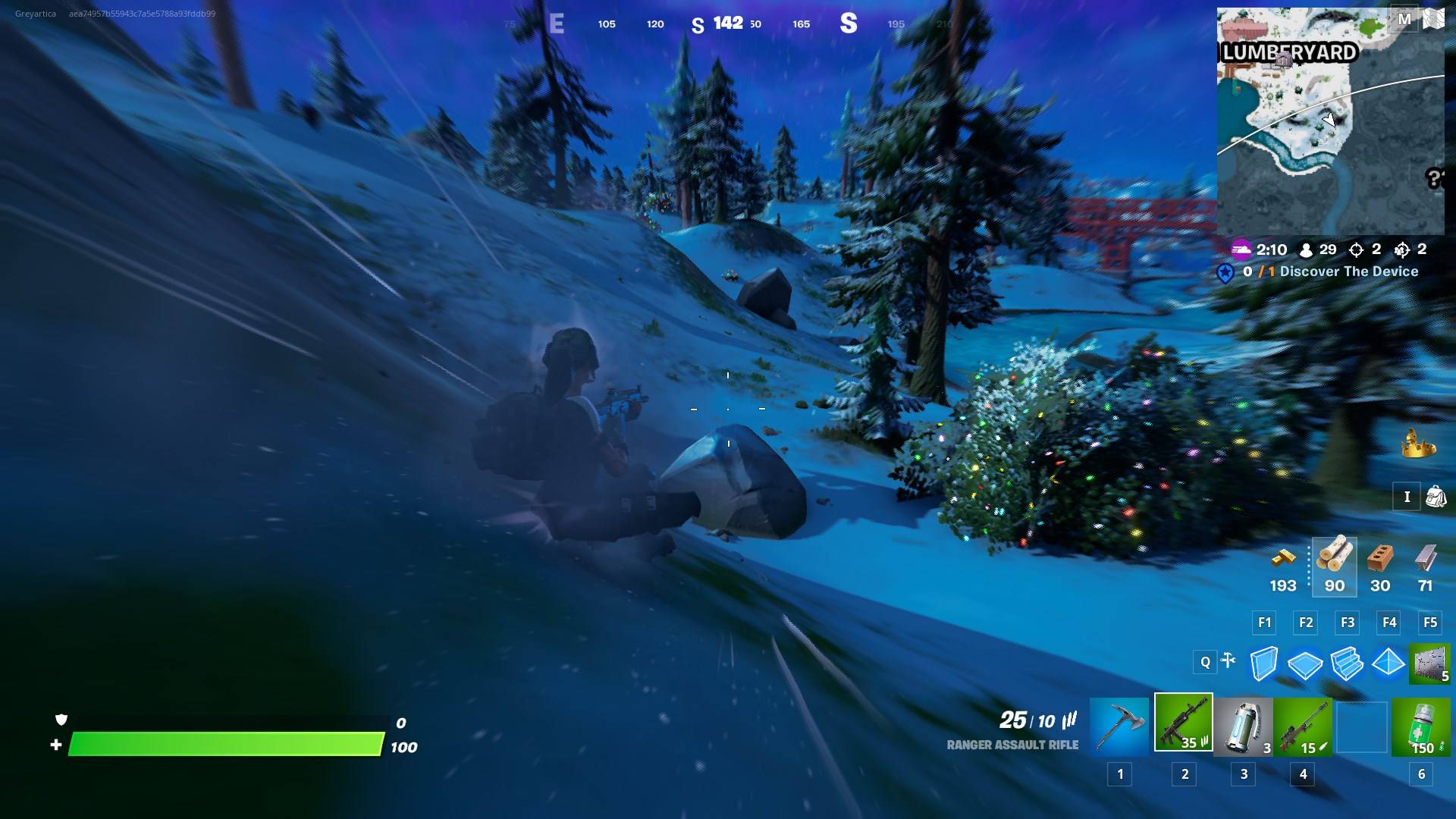 Learn To Love The New Weapons

Chapter 3 vaulted not only Apollo Island, but also most weapons. Everything from the standard assault rifle to the combat pistol has been put on the shelf. The good news is that the new weapons are a grand mix. It's best to start learning how to make the most of them quickly.

The new Ranger Assault Rifle and MK-Seven Assault Rifle serve as this Chapter's mid-range weapons. Between the two, the Ranger Assault rifle offers more versatility. It has a slower fire rate than the MK — four compared to the MK's nine — and has a significantly lower DPS as a result.

The big difference is that its shots pack much more of a punch. If your aim is true, you can consistently down enemies in four or five shots. The gun does have a wide bloom, but at mid-range it shouldn't be too much of an issue.

At longer ranges, the new Hunter Bolt-Action Sniper should always be in your hands. It has high projectile speed and does an immense amount of damage at any rarity. At Rare, you'll be able to down an enemy in just two body shots. With the Hunter, you can aim right on top of most enemies at long range and the gun's projectile speed will ensure you hit your mark.

Use Tents To Stash Items And Heal

Artemis is a big map, and you may find yourself in need of a break while trekking across it. The new tents are just the place to take a load off. You can find Tents randomly across Artemis in nearly every point of interest.

Once claimed, you can rest inside a tent to heal five health per second and even stash up to three items inside them. You can retrieve your items not just in that game, but in future ones as well. Your items will be in the tent you claim in later games.

You can also carry tents with you. If an enemy is around the corner and you need to get out of your tent quickly, don't just leave it. Instead, use the manage inventory menu to deconstruct it while still inside. This will immediately deconstruct it, letting you instantly start running in a direction. 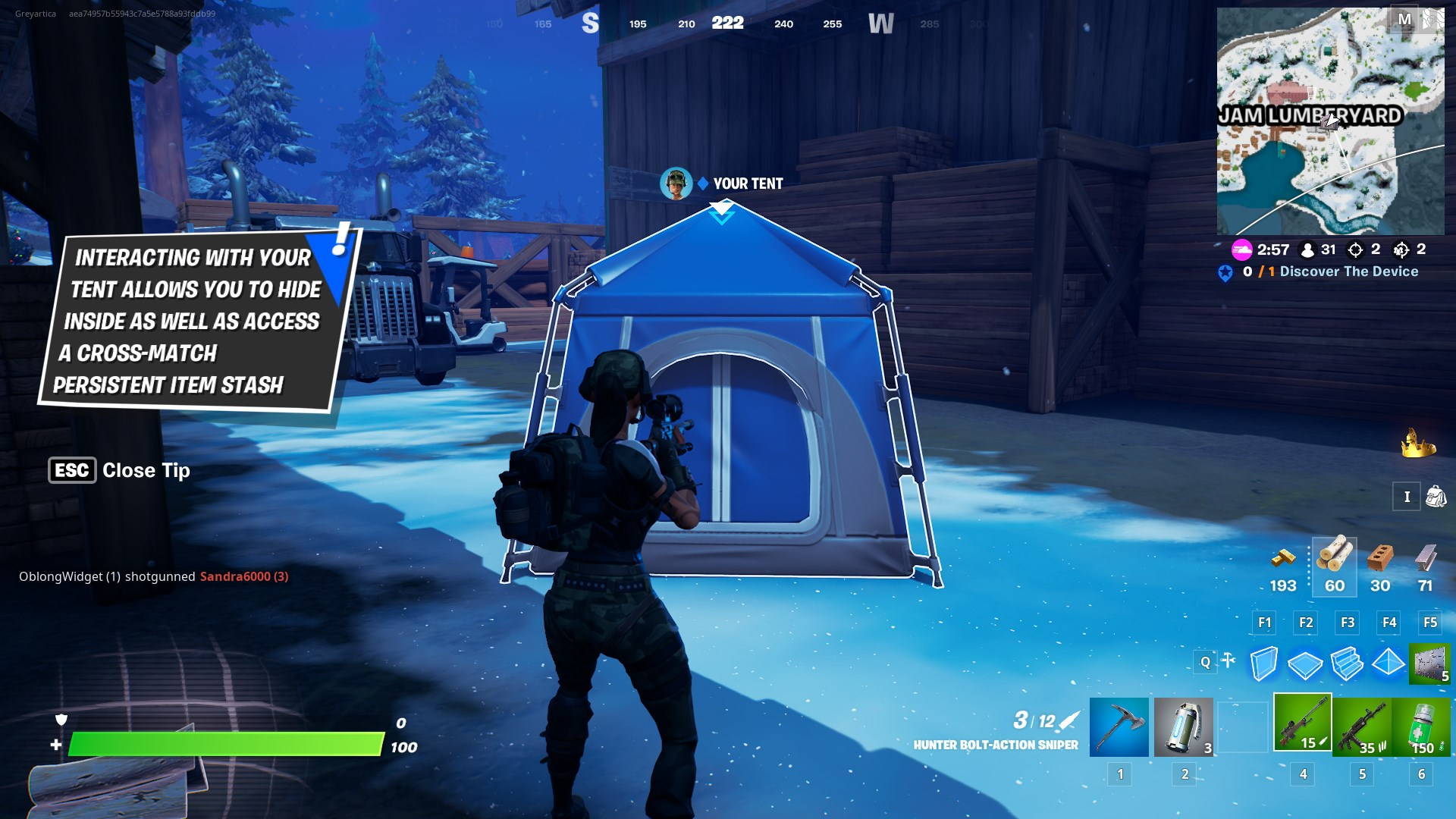 Use Tents To Stash Items And Heal

Med Mist is the latest healing item to be added to the game. Holding down the use button sprays the player with a healing mist that restores five health per second. A can of Med Mist can heal up to 150 health — 50 more than a full heal would require. You can put this extra 50 health to good use by spraying down teammates with it.

You can also use Med Mist while sliding or walking, making it far more versatile than bandages. If you're playing in a squad, make sure that one player has a Med Mist at all times. They can act as a pseudo-medic during fights, healing low-health teammates.