Fortnite's debut season for Chapter 3 is coming to an end TODAY. Chapter 3 came in with a bang, featuring everyone's favourite Web Slinger and a WWE icon.

A new season means a fresh overhaul of content for players to enjoy. The map, weapons and skins are just some of the things to get an overhaul. It doesn't stop there as many functions structures in the game are changed such as the way XP is earny and how quests are laid out.

So what can we expect this season in Fortnite? Here's what's new in Chapter 3 Season 2.

Servers are now back online!

Here are the sizes for the Fortnite Chapter 3 Season 2 update:

We'll update this regularly as we hear more - be sure to bookmark this page. Check out the below for the latest leaks!

Here are some of the highlights from this patch:

Check out the Patch notes for Creative and Save The World below!

There are also additional rewards to unlock during the season throw completing Special Quests and levelling up past level 100.

We're expecting the price to remain the same for the Battle Pass - costing 900 V-Bucks to purchase the premium Battle Pass with a free option still remaining.

Those that want to push on and give themselves an advantage can pay for the Battle Pass Bundle. Costing 2800 V-Bucks, it gives players an additional 25 tiers from the get-go.

How Will It Work?

The Battle Pass will adopt the same style as it has done in the past few seasons, opting for players to collect Battle Stars and unlock what they want at their own pace. 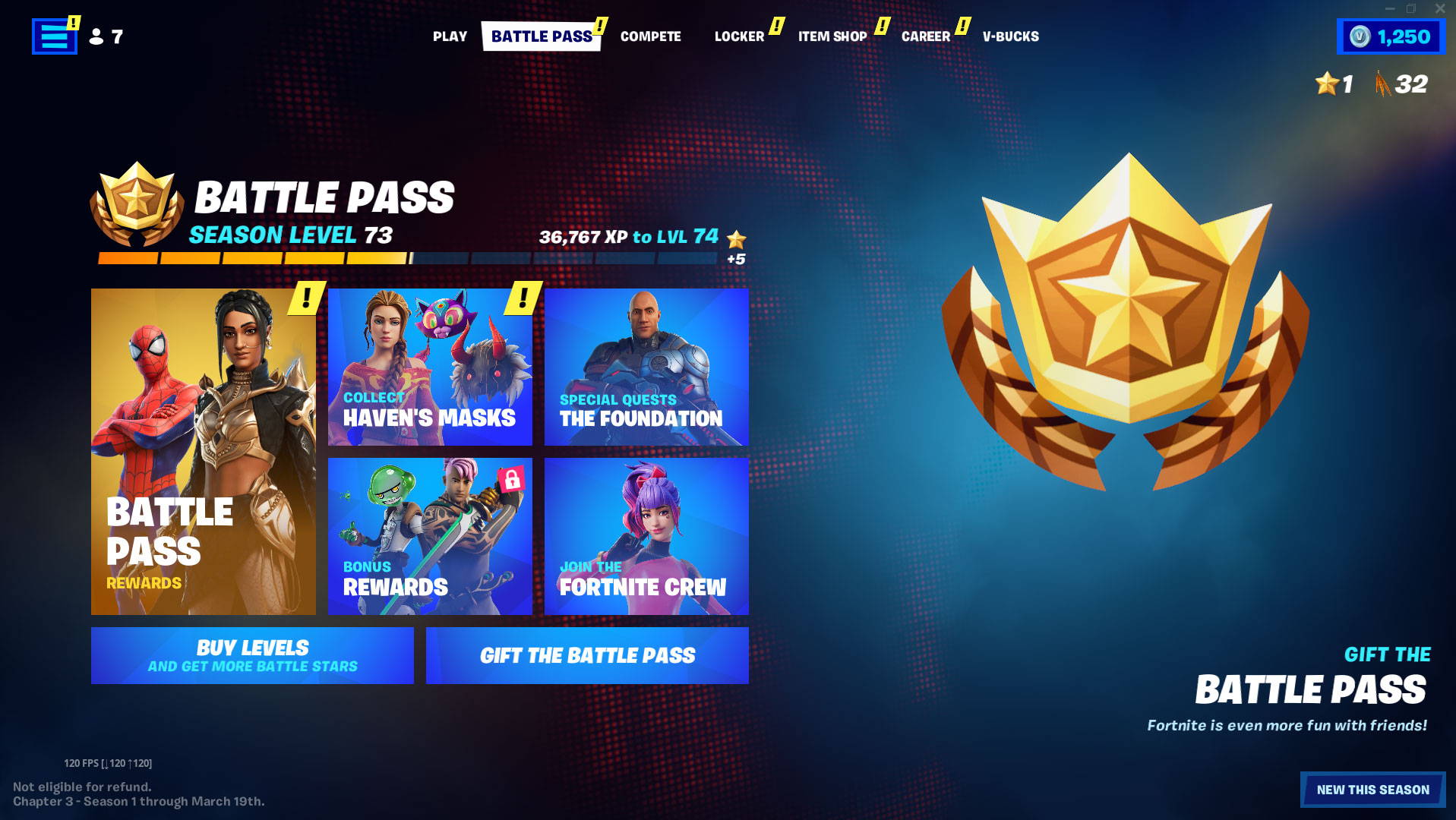 When Season 1 began, we got an entire map change. This is usually the formula Fortnite upholds for new chapters, but as new seasons begin, only some areas and parts of the map change to reflect the overarching story. We are likely to get a new POI or two, but the map will still remain true to its original shape and layout.

Here's the new map below: 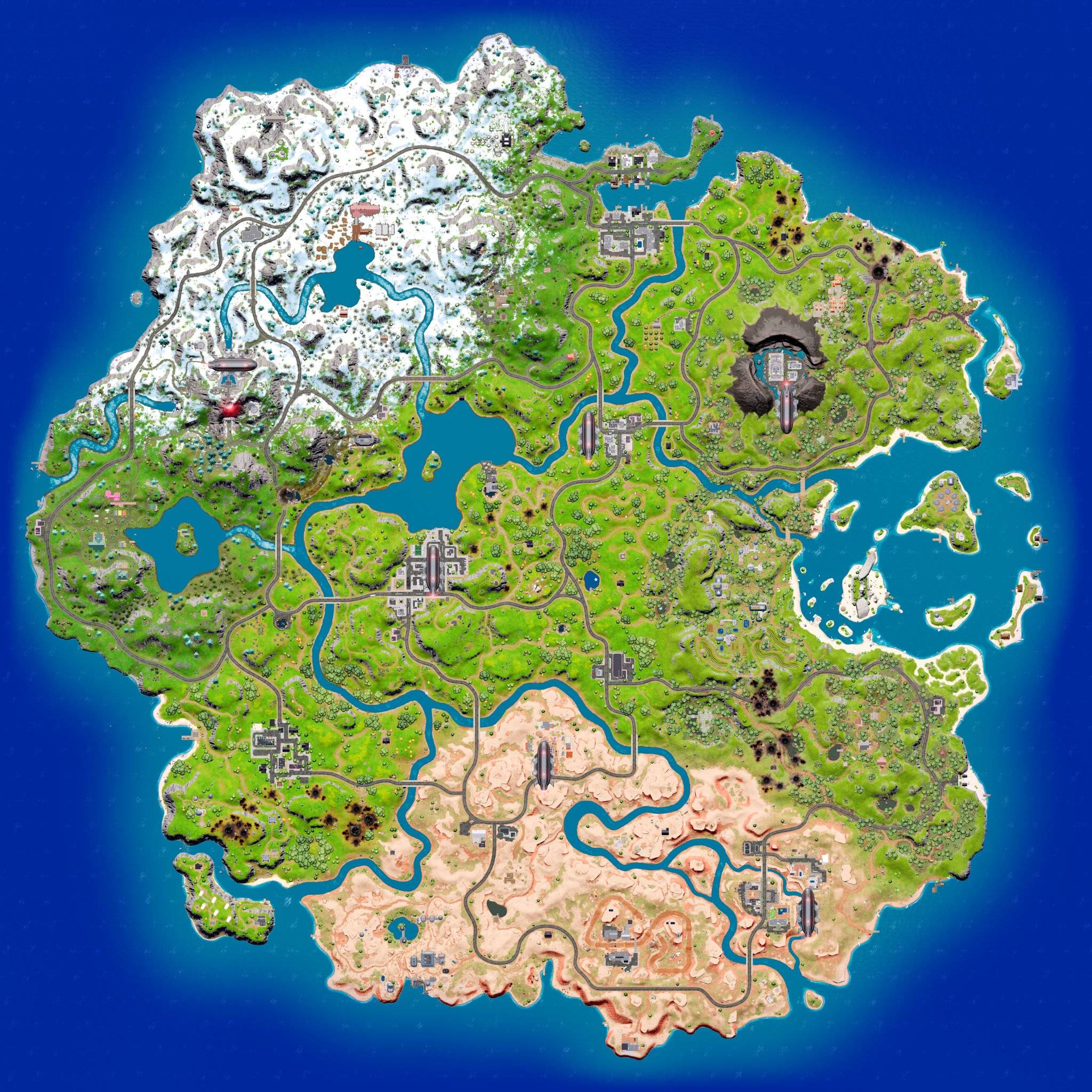 @HYPEX has mentioned the following:

"Over the course of the season, it's clear that the IO is preparing for something big as their drills appear across the map, probing for weakness in the Seven's foothold on the island."

HYPEX has also stated that we could see a replication of the infamous rocket event from Chapter 1, due to a location looking very similar to a rocket launch pad, along with certain game files relating to this.

It seems as the IO and The Seven will have control over different parts of the map as the season progresses!#Fortnite pic.twitter.com/DSYgd77ueO

The Foundation Statue was destroyed!

The Daily Bugle is still here! (spotted by @Ta5tyy2) pic.twitter.com/wUvCdyjP77

Some of the battlefields around the map. pic.twitter.com/WTc9Xye01D

There are a lot of bombs on the blimps 😳 pic.twitter.com/Xf3EVnVUkS

Peely and Quackling will be NPCs this season according to @iFireMonkey.

Zoe Clas may will be this season's starter pack.

Another skin to come could be Cloud Strife...

First unOfficial Teaser for Fortnite Chapter 3 Season 2! Looks like Cloud Strife might be joining the fight! Hopefully he isn't on Slone's side. #TeamSeven pic.twitter.com/tagFXOtBnf

There will be a new Supply Drop:
- Seven Supply Drop pic.twitter.com/sA3Omuu6cm

- Upcoming Vehicle: Quad Bike
- Tool Boxes are back for some reason (the ones that drop nuts n bolts)
- C4s now do x12 the damage to vehicles
- Thermal Flopper duration changed from 45s to 30s
- Heavy Snipers do more damage to vhicles

Tool Boxes are back or at least returning very soon, they now have a 30% spawn chance instead of 15.

Gaining the high ground has always been key to winning a battle and fortunately, where your feet fail, your hands will now help you out. If a surface is just a little too high for your jump — or a platform just a little too far for your landing — your hands can come into play and pull you up!

Speaking of sprinting, sprint at doors to bash them open with your shoulder. It’s probably not very polite, but at least you look cool doing it.

(You can also slide into doors to open them now!)

All these new features can be turned on and off via the My Island Settings menu.

Like the Combat Assault Rifle and Combat Pistol, the Combat SMG packs a heavy punch. Tame its recoil to get the most out of its exceptional power.

The Striker Burst Rifle is a burst-rifle with a customized sight. Strike with this two-shot semi-automatic weapon as you aim with the scope!

THE REPAIR TORCH: A HEALING ITEM FOR YOUR VEHICLES!

Whether your Mudflap’s been subject to explosives, your Motorboat’s been running too long on land, or your Titan’s been targeted at the treads, fix it up with a Repair Torch! Repair Torches restore the Health of vehicles, and if they run out of fuel to ignite? Fill ‘em back up at a gas pump!

Great news creators; Fireflies have migrated and have found their way to your Creative islands! Now you can place swarms of fireflies that players can collect for themselves instead of you having to grant them via devices.


DOES THIS CHANGE HOW SAVE THE WORLD IS PURCHASED/ACCESSED?


WHAT ABOUT THE ITEMS I’VE ALREADY PURCHASED/COLLECTED?