Who's the new champ?

With Zeri, the first champion of 2022 out in the wild, attention is turning to the next.

Renata, The Chem-Baroness, is the second champion to be added to the roster for this year and is this year's new Support champion.

League of Legends is always evolving over the years, and this is why the MOBA developed by Riot Games has maintained its sucess over the years.

With constant updates adding new legends and so on, there's been some leaks that may detail the new Champion for the game.

Life had not always been good to Renata Glasc.

Her parents were brilliant alchemists, focused on innovations for the healing arts. Dedicated to their work and their community in Zaun, they gave their care and their cures to anyone in need... regardless of whether their patients could afford them. Renata grew up accustomed to going to bed hungry, resentful of her parents’ ideology, yet powerless to change her circumstances. She dreamed of the ships that sailed through Piltover’s Sun Gate canal, imagining herself taking the wheel and steering her life in a new direction—toward the riches of the world.

When she was old enough to join the family business, it was quickly discerned that Renata had no aptitude for alchemy. She did, however, have ideas about turning a profit. In her first sales pitch, Renata convinced her parents that they wouldn’t need to ask anything more than people could give, if they started treating wealthier Zaunites. With loyal patients extolling the Glascs’ talents to their betters, their charity work was soon paid for by the rates Renata set for the rich.

Instead of living comfortably, however, the Glascs spent that money developing a highly refined chemtech formula to extend the lives of their sickest patients. No matter what they did, the formula always had unwanted side effects—such as making their patients extremely suggestible, or extremely violent—so they continued to try and improve their work. Only Renata, bitter at what her parents chose to do with the money she had earned them, wondered if the formula could be useful as is.

Up in Piltover, the elite clan leaders who had been making money off of Zaunite medical stopgaps heard whispers of the Glasc family’s research. Not willing to let anything threaten their bottom line, they paid off a handful of enforcers to “take care of it.” Renata woke to the sound of her parents’ screams as her home burned down around them. She lost her arm trying—and failing—to save them.

With only her family name and the scraps of research that survived the fire, Renata swore to avoid her parents’ mistake of thankless altruism. Instead, she threw herself into building her meager inheritance into something bigger, something that could give her everything she’d never had, something that would give her money and power and control. An empire.

As the years passed, she became the brains behind several successful small-time operations while building relationships with unsavory, but influential, individuals throughout the city. She’d give people jobs, lend them money, and give them medicine for their sick children—but never for free. If they couldn’t pay in coin, she demanded their loyalty.

Renata quickly realized that genius was the rarest and most lucrative commodity in Zaun and devised a plan to invest in destitute youths with a talent for innovation. She offered a space to work and stability for their families in exchange for their work in perpetuity. The poorest among them couldn’t afford to say no. Renata found herself with plentiful access to new and unique product designs, and novel uses for the chemtech formula that was her parents’ legacy. Profits soared. She then established Glasc Industries after purchasing the first of what would eventually be dozens of factories to manufacture her high-end chemtech products.

Glasc Industries quickly expanded across Zaun—from chemtech mining operations to dance halls to refineries—angering some barons who’d held monopolies over the ventures. But, one by one, Renata persuaded them all to go into business with her. And just like that, Renata quietly managed to become a chem-baron in her own right, and no one could push back for fear of upsetting their own cash flow. While Glasc Industries flourished, Renata herself remained in the shadows, waiting for the right time to make her next move.

That time came after a chemical accident sent poisonous fumes sweeping through the streets of Zaun, leaving the city in its worst state in decades. Amidst the noxious gray clouds, Glasc Industries offered basic breathers and replacement filters to everyone in the city… for free. Now everyone in Zaun knew of Renata Glasc and her benevolence. She had earned Zaun’s loyalty.

Word of her generosity swept through Piltover, as well. For the first time, shopkeepers looked seriously at Renata’s elegant and ultra-refined chemtech designs and soon lined their shelves with her products.

Now, every fashionable Piltovan owns at least one Glasc Industries product, and the wealthiest among them vie to sit beside Renata at novelty galas and the opera house. But Renata’s plan was never to be a chem-baron in Zaun or the corporate darling of Piltover.

No, she aims to take Piltover’s source of financial power for herself—the Sun Gate she had dreamed of so often in her youth. For she who controls the Sun Gate, controls the flow of trade; and she who controls the trade, controls the world. With a secret cache of her parents’ chemtech formula embedded in every Glasc product in both Piltover and Zaun, ready to be released at her command—side effects and all—it’s only a matter of time before everyone works for Renata Glasc.

Renata Glasc sends out a missile from her robotic arm that roots the first enemy hit. She can reactivate the ability to throw the enemy in a target direction, damaging enemies hit and stunning them if the thrown target is a champion.

Renata Glasc sends out a missile from her robotic arm that roots the first enemy hit. She can reactivate the ability to throw the enemy in a target direction, damaging enemies hit and stunning them if the thrown target is a champion. pic.twitter.com/rEToTO3flL

Renata Glasc grants an allied champion or herself ramping Attack Speed and Move Speed toward enemies. If the ally gets a takedown on an enemy champion, the buff duration resets.

Renata Glasc grants an allied champion or herself ramping Attack Speed and Move Speed toward enemies. If the ally gets a takedown on an enemy champion, the buff duration resets. pic.twitter.com/Lb6kzcqec9

Renata Glasc sends out chemtech rockets that shield allies and damage and slow enemies they pass through. The rockets also apply their effects around her on cast and in an explosion at max range.

Renata Glasc sends out chemtech rockets that shield allies and damage and slow enemies they pass through. The rockets also apply their effects around her on cast and in an explosion at max range. pic.twitter.com/HRFKZgxdXK

She sends out a cloud of chemicals that causes enemies to go Berserk, increasing their Attack Speed & forcing them to basic attack anything around them. Berserk enemies prioritize attacking their own allies, then neutral units, then her team, then herself.

She sends out a cloud of chemicals that causes enemies to go Berserk, increasing their Attack Speed & forcing them to basic attack anything around them. Berserk enemies prioritize attacking their own allies, then neutral units, then her team, then herself. pic.twitter.com/6j3SsTtA4o 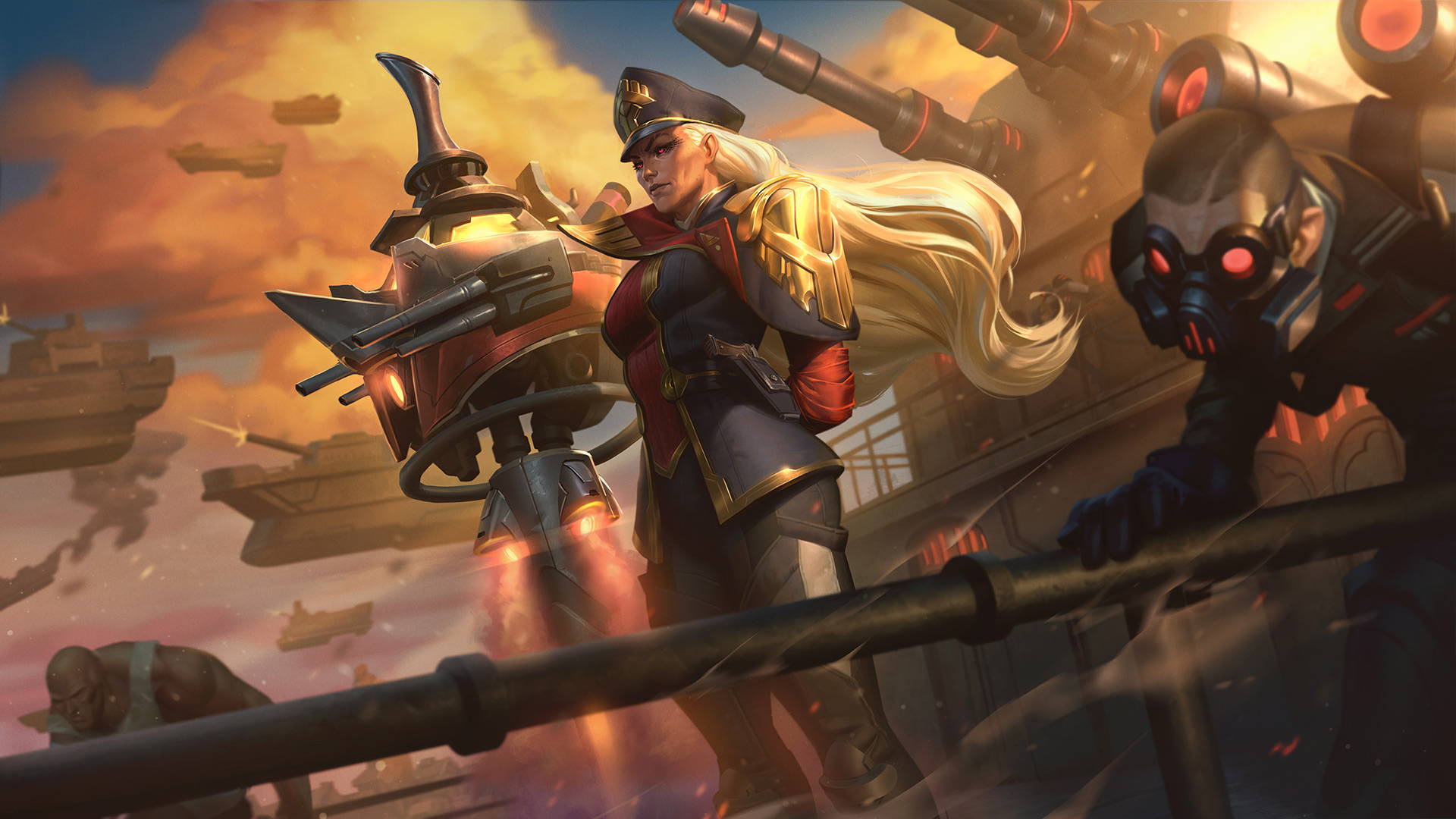 In our opinion, Renata’s best rune choice is Summon Aery, which grants her abilities to buff and give protection to allies. When it comes to secondary rune choices, you’ll likely want to focus on Adaptive Focus, Transcendence, Manaflow Band, or Scorch.

This new Champion does have a few secondary tree options, too. Inspiration, for example, offers a great cooldown reduction and the addition of lane sustain. On the other hand, Domination can deal out high-impact moments with Ultimate Hunter.

Renata is an interesting addition to League of Legends thanks to her approach to fights. While in the Laning phase, Renata is able to get decent picks and initial skirmishes thanks to her Q ability. Land it on the enemy, and you can open up a world of opportunities for skirmishes, especially if you aim it towards a Champion in the other lane. In the middle lane, the Q ability can be extremely helpful to pick off a rival and hopefully claim the lane tower.

For bigger engagements with a team, it would be wise to stay back and peel for your teammates. You’ll need to bolster the hyper-carry or the strongest available Champion on your squad. Do this to make incredible use of the stats that your W ability can offer.

Preparing to use Renata for the first time? Keep these tips in mind:

Renata is available now in League of Legends patch 12.4, which was released on February 16, 2022.

Article author: Sam Comrie is a journalist and filmmaker based in Sheffield, UK. When he isn't causing chaos in Just Cause 2, you can find him listening to Foo Fighters on repeat 24/7. Seen at NME, Red Bull Gaming, From Gamers Magazine, and JumpCut PLAY.